OCTOBER REVOLUTION (released on the 70th Anniversary of the revolution).

Spring cover is marked with the order of the October Revolution; The back cover is embossed with "70 Years of the October Revolution 1917-1987".
OCTOBER REVOLUTION (released on the 70. Anniversary of the revolution).
The Great October Socialist Revolution of October 25-26 a. St. (7th / 8th November n. St.) 1917 in Petrograd (St. Petersburg) and 30.10. a. St. in Moscow. It overthrew the bourgeois Provisional Government and founded the Bolshevik regime in Russia. 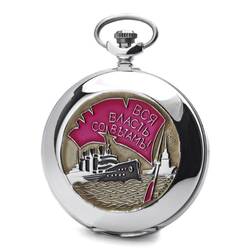