WEEKDAY-WHIZ is an impressive piece of jewelry at the same time it is a reliable precision device. The very rare caliber 31677 built by MakTime (Poljot) is based on the legendary Poljot 3133. In contrast to the 3133, an additional complication is built into the 31677 - the weekday calendar at 6 o'clock.

The Russian names (transcription in Latin) on the weekday display are translated as follows:

The Poljot 3133 (31677 similar) clockwork
Has a Russian heart, driven by Swiss precision. In the early 1970s, Poljot wanted to modernize the 3017 chronograph movement that had been produced to date. The number should increase. The filigree ratchet mechanism of the 3017 was to be replaced with a modern cam switch mechanism. The 3017 was already built on a production line imported from Switzerland by Venus (Fabrique d'Ebauches Vénus SA) based on the Venus 150. This tried and tested procedure was to come into play again in the early 1970s with the new chronograph (31mm). This time a production line was taken over by Valjoux SA (now ETA, Swatch Group) and the movement was given an even stronger Russian heart (balance). The basis for the Russian Poljot 3133 was the Valjoux 7734 resp. 7733. The machines, plans and know-how were bought again in a very good place. 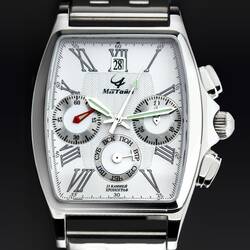