A TOP collector's item from the last and long-lost Poljot production from 2007. This collection is characterized by absolute TOP quality and workmanship of all components for Poljot. Details such as the ornate work and elegant deer bracelets say it all. You can tell that this series wanted to make a luxury feeling statement. However, the entire series was never released and was gone for many years. We are very pleased to be able to offer these great watches now.

The Poljot 3105 movement: is very nicely finished with a noble pearl and Geneva stripes. TOP!

Technical data Poljot / MakTime 3105
Elevator: hand-wound
Movement caliber: 31 mm
Movement height: 5.38 mm
Jewels: 17
Functions / complications: hours, minutes, seconds, calendar
Shock protection: Yes (Poljot)
Frequency: 3 Hz (21,600 vph)
Daily rate deviation: from -10 to +50 s / day (manufacturer information MakTime)
Power reserve: 42-45 hours
The Poljot 3133 (3105 is based on the same assembly) movement
Has a Russian heart, driven by Swiss precision. In the early 1970s, Poljot wanted to modernize the 3017 chronograph movement that had been produced to date. The number should increase. The filigree ratchet mechanism of the 3017 was to be replaced by a modern cam switch mechanism. The 3017 was already built on a production line imported from Switzerland by Venus (Fabrique d'Ebauches Vénus SA) based on the Venus 150. This tried and tested approach was to come into effect again in the early 1970s with the new chronograph (31mm). This time a production line was taken over from Valjoux SA (now ETA, Swatch Group) and the movement was given an even stronger Russian heart (balance). The basis for the Russian Poljot 3133 was the Valjoux 7734 resp. 7733. The machines, plans and know-how were bought here again in a very good place.
History of Poljot
This goes back to the year 1930. At that time the factory was called the "First Moscow Watch Factory". The first movements of the new Type-1, which was suitable for the masses, were manufactured for the first time on an imported production line of the Dueber-Hampden Watch Company, Ohio. By 1952, production had increased to 1.1 million watches. The country should be supplied with good watches. The military and science needed more precise clocks. In 1964 the name of the factory was changed to Poljot (flight). The watch industry was not only a necessity but also a showcase project in the Soviet Union and Poljot was the greatest success. Other works such as the alarm plant Poljot 2612 and many more were produced. In 1990 the production level was 5 million watches a year. Hundreds of employees made this achievement possible. In 2004 Poljot had to go bankrupt despite a long and proud history. Many highly qualified employees lost their jobs at the time.
History MakTime
However, the 31mm chronograph production line was taken over by the Moscow company MakTime von Poljot from 2005 and thus saved for the time being. The good standard of production was maintained and in large parts even improved. MakTime then unfortunately had to stop production in 2012 due to bankruptcy. Too few quantities were sold internationally. In the meantime, the company had 700 employees divided into the production of the 31mm chronograph movement and the clocks in Moscow. The other employees worked in the Penza watch factory and produced smaller movements for ladies' watches under the Zaria brand.
Expiry after purchase
The watch is checked by our watchmaker for at least 1 day. Many of our watches are New Old Stock, so our watchmaker measures them on the timing machine and adjusts them if necessary. So please be patient that these watches are not dispatched on the same day.
Service and repairs
We have specialized in the repair of Russian clocks and clockworks for over 25 years. In our fully equipped workshop, everything can be serviced, repaired or repaired around your clock by one of our watchmakers. 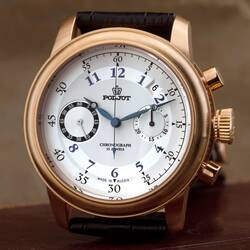 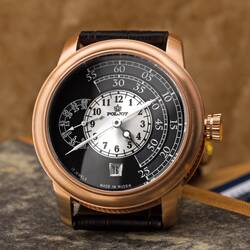 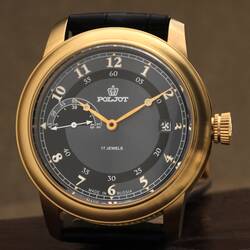 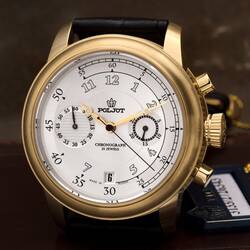