On the back cover is a representation of the Russian Orthodox male monastery in the city of Sergiev Posad, which was founded around 1340 by St. Sergius of Radonezh. The spring lid is decorated with a gold-colored 12-headed cross.

The original MOLNIJA papers with a short instruction manual are in Russian.

Standard plastic packaging - original from MOLNIJA is included in the scope of delivery.

The Molnija 3602 was produced for almost fifty years, between 1960 and 2008.
It goes back to the Cortebert 616 produced in Switzerland in the 30s / 40s, the machines of which were probably then sold to Russia.
In the course of time, this work has been modified several times, above all the construction height has increased by over a millimeter, and the decoration became more and more economical, until at the end almost no decorative cuts or other decorations were applied.

The complex history of the "Troiza Sergieva Lavra" monastery is the result of many changes and reconstruction measures over the centuries since its foundation, resulting from fires, war, imperial support and sponsorship.

No single building can therefore be assumed to be in its original state.
However, the importance of the monastery as a symbol of Russian cultural identity justifies the enormous investment of time and money that went into preserving and restoring it.

Founded as a monastery in the 1330s, the political commitment of its founder, monk Sergius, son of Rostov the Great, quickly attracted the attention of the royal family.

Destroyed for the first time by a large fire in 1408, the core of today's facility was rebuilt according to the original plans. From then on, the monastery grew in wealth and prestige, and the first stone building (cathedral with masterpieces by eminent artists such as Andrei Rublev and Daniil Chernyi, 1422) was erected.

In the course of the 16th century, due to its favorable location, it was converted into a bastion of the defense of Moscow and also served as a refuge for the tsar.

In 1744 the monastery received the title "Lavra", which is the highest distinction of the Russian Church.

In 1746 the monastery was destroyed again by a great fire. The last buildings, once made of wood, were then rebuilt from stone and new elements were added.

In the late 18th century the monastery was expropriated in the course of secularization, the complex was nationalized and in 1782 became the city of? Sergiev Posad? explained.

In the middle of the 19th century the city experienced an economic boom due to the improvement of the infrastructure and the resulting stream of pilgrims.

After the revolution of 1917, the monastery was closed, the artistic and historical treasures nationalized and placed under a commission, the repair and restoration of the monuments entrusted to another commission. 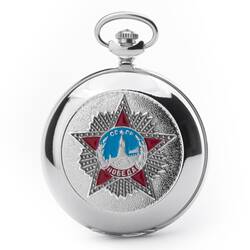