ORLAN is a Russian multifunctional unmanned aerial vehicle designed mainly for observation missions. His work was once developed by the "Special Technology Center". Orlan has been actively used in the armed forces of the Russian Federation since 2010.

With this pilot's chronograph, Pilot's design is based on the Russian ORLAN spacesuit. The bright metallic dial, which changes to darker tones depending on the perspective, is based on the material of the suits. This is why these Orlan chronographs are available in red and blue. With these colors, the pilot is based on the spacesuits. They are available with red and blue accents. This is important in order to clearly distinguish your material up there and to be able to distinguish from a distance, for example, who is repairing the ISS and where, so that everything stays together. Together with the rare mechanical Poljot 3133 movement, which you can see at work through the beautiful glass bottom, this watch is an absolute collector's item with a high everyday value. 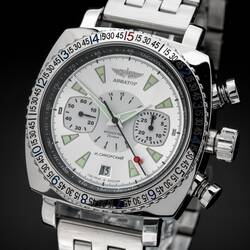 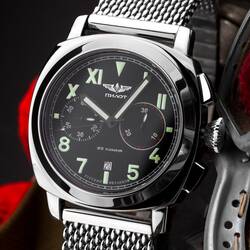