Kokkinaki comes from a Polish-Greek family. He joined the Red Army in 1925 and graduated from the Leningrad Aviation School in 1928. He received further training at the Borisoglebsk flight school and graduated in 1930. In 1931 he went into active service with 11. Fighter squadron. In 1932 he was appointed commander of an aviation division and in 1935 as a test pilot. His first task was to fly in the Kotscherigin TSch-3 attack aircraft, which was new at the time.

In the 1930s he was a member of the I-16 equipped five-man aerobatic team "Krasnye djawoly" (Red Devils). Kokkinaki first drew international attention on 21. November 1935, when he set a new absolute world altitude record for airplanes in a Polikarpov I-15 at 14,575 m, the first record of the USSR to be recognized by the FAI. Kokkinaki completed other record flights, including over long distances. The flight of Kokkinaki and his navigator M. Ch. Gordijenko with the DB-3 "Moskva". On the 28th. April they started in Moscow with destination New York. After 8,000 kilometers with the Trondheim, Reykjavik and Cape Farvel stations, a hurricane over Labrador forced them to climb to 9,000 meters. After all fuel and oxygen had been used up, Kokkinaki landed on 29. April with retracted landing gear next to the lighthouse on the island of Miscou in New Brunswick, Canada. The DB-3 was in the air for 22 hours and 56 minutes, which corresponds to an average speed of 348 km / h. In total, Kokkinaki set 22 world records. In 1938 he became a member of the Communist Party of the Soviet Union.

During the Second World War, Kokkinaki remained a test pilot, was promoted to major general in 1943 and chief inspector of the aircraft industry. Until his retirement from active service, he worked as a test pilot. He set his last world record in 1960 when he flew 5018 km with an Ilyushin Il-18 and 10 tons payload and reached an average speed of 693 km / h. In 1961 he became Vice President and 1966 President of the Fédération Aéronautique Internationale.

For his achievements, Kokkinaki was twice (1938 and 1959) honored as Hero of the Soviet Union, the title "Honored Test Pilot" and the Lenin Prize. 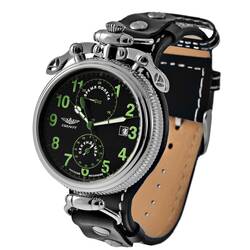